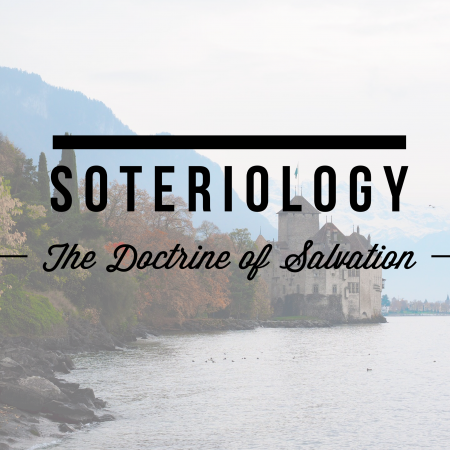 Soteriology is basically the study of salvation in the Bible. Soteriology is a major theme in the Bible and a proper understanding of it makes clear the answer to man’s greatest need, salvation. Salvation is deliverance from sin, death, and eternal punishment to spiritual blessings seen both now and in an eternal life with God.

The verb “to save” is found over 100 times in the New Testament and is translated to “rescue,” “deliver,” and “save.” The word “salvation” is used 49 times and “savior” 24 times. In the midst of a storm on the Sea of Galilee, the disciples cried out, “Save us, Lord; we are perishing!” (Matt 8:25; also see 14:30). This use of the word is when the Lord saves someone from earthly peril. But the doctrine of soteriology deals with spiritual salvation. John the Baptist was called the “horn of salvation” at his birth (Luke 1:69, 77). Those who heard Jesus’ teaching asked, “Then who can be saved?” (Luke 18:26). Peter preached, “there is salvation in no one else; for there is no other name under heaven that has been given among men by which we must be saved” (Acts 4:12). The Philippian jailer asked Paul and Silas, “Sirs, what must I do to be saved?” (Acts 16:30). Paul said that “if you confess with your mouth Jesus is Lord, and believe in your heart that God raised Him from the dead, you will be saved” (Rom 10:9). These are just a few examples out of the almost 200 in the NT which speak of an eternal, theological meaning of deliverance from sin and the wrath of God against that sin.

Knowing what the Bible has to say about salvation helps to answer key theological questions we have as Christians. As we have seen with false teaching, the main question we want to answer is, “how is one saved?” Another question we want to answer by studying the Scriptures is, “who are the objects of salvation?” Are the angels, the creation, or humans the only ones who are saved? Is justification a process like the Roman Catholicism teaches, or is it an event like evangelical theology believes? Another important concept to study is the order of salvation. God is not a God of disorder and has put specific statements in the Bible by which we can learn how certain events occur in our salvation. This deals with how to line up election, divine calling, regeneration, conversion (faith and repentance), union with Christ, justification, sanctification, and glorification. Obviously different theological camps will arrange these differently, but we must ask what the Bible teaches on these issues.

By studying what the Bible teaches on salvation, we are able to preach a true gospel to unbelievers, teach disciples what has occurred and is occurring in them, and refute false gospels. By studying what is God’s true doctrine of salvation, we can better recognize the various views of salvation that have been taught throughout church history. Traditional Roman Catholic theology has taught that salvation can only be found in the one true apostolic Roman Catholic Church which supposedly was established by the apostle Peter. They see salvation as a process which combines both faith in Christ and good works throughout one’s life. Salvation is seen as a work between God and man (called synergism). However, at the Second Vatican Council in the 1960s Roman Catholicism changed its view on salvation and accepted others outside their church as possibly being saved, including Protestants and followers of other religions. Protestant liberalism, which is popular in the mainline American denominations, sees salvation as a moral transformation of society towards good. Liberals deny any supernatural events and deny the Bible’s authority over their lives. They do not believe that Adam fell into sin (if they even believe Adam existed), nor the doctrines of human depravity, divine wrath, or substitutionary atonement. Liberal theology sees Jesus as the model for good ethics and morals in the world. Christian existential theology focuses on the individual’s experience in religion. Those who hold to existential theology see the human problem as one of trying to meet society, family, and the priest’s expectations. Existentialists think that faith transcends all reason and logic and cannot be proven. They seek to solve this problem by positing a radical commitment to Christ separate from any creeds or systematic theology which has traditionally been held by the church. Barthian neoorthodoxy, developed by the theologian Karl Barth in the last century, taught that all man would be saved through Elect One, Jesus Christ. Liberation theology sees the biggest problem in the world as injustice, oppression, and exploitation of the poor. For them, salvation is a salvation or deliverance from this oppression. Liberation theology is often found in three forms: black liberation theology, feminist liberation theology and third world liberation theology.

Contrary to all these false views, the Bible teaches a true gospel of salvation. Because all mankind is separated from God by sin, we need a savior to reconcile us to God. Through Christ’s payment for sin on the cross, He was substituted in the place of those who trust in Him. This in turn means we receive His righteousness and on the basis of this are declared righteous by God. It is only by faith alone in Christ that one is justified and not by any works or merit that a person has supposedly earned. After the event of justification, a believer goes through the process of sanctification in their life where they are made more like Christ. In the future, as part of salvation, all genuine believers will be glorified and live with Christ in the millennial kingdom and eternal state. Salvation is all by the grace of God, as He plans it from the beginning by election, He makes sure it will come to pass through faith and repentance, and preserves His elect to the end.

Salvation is the major need of the human race. Without it, we are all lost in our sins. Yet God has shown us the way of salvation in the Bible. If we study it, we can see that through God’s gracious acting on behalf of sinners He has provided a way of salvation. This doctrine of salvation, called soteriology, has a beneficial place in the life of a Christian. It would profit all believers to learn more about biblical soteriology.